Purim with Chabad of Flatbush

The abridged story of Purim

Purim celebrates the salvation of the Jewish people, in the year 3405 from Creation (356 BCE), from Haman's plot "to destroy, kill and annihilate all the Jews, young and old, infants and women, in a single day."

Haman was Prime Minister to the Persian emperor Achashveirosh, whose dominion extended from India to Ethiopia. Endorsed by Achashveirosh, Haman's decree boded the physical destruction of every single Jew on the face of the earth.

While the sage Mordechai rallied the Jews to prayer and repentance, his cousin, Queen Esther, engineered Haman's downfall at a private wine-party to which she invited the king and the minister. She prevailed upon Achashveirosh to hang Haman and to issue a second decree, empowering the Jews to defend themselves against those who sought to destroy them.

On the 13th of Adar — the day selected by Haman’s pur (lottery) — numerous battles were fought throughout the empire between the Jews and those who attempted to carry out Haman's decree (which was never actually revoked). The following day, Adar 14, became a day of feasting and rejoicing in celebration of the Jews' victory over their enemies. In the ancient walled capital, Shushan, where the battle went on for two days, the victory celebration was held on Adar 15.

Mordechai and Esther instituted that these two days be observed for posterity as the festival of Purim — Adar 15 in walled cities, and Adar 14 in unwalled towns — by public readings of the story of the miracle as recorded in the "Scroll of Esther," sending food portions to friends, giving gifts of money to the poor, and enjoying a festive meal accompanied with inebriating drink (recalling the fateful wine-party at which Esther turned Achashveirosh against Haman).

A time-honored Purim custom is for children to dress up and disguise themselves — an allusion to the fact that the miracle of Purim was disguised in natural garments. This is also the significance behind a traditional Purim food, the hamantash — a pastry whose filling is hidden within a three-cornered crust. The day before Purim is "The Fast of Esther," in commemoration of the fasts of Esther and her people as they prayed for G‑d's salvation from Haman's decree.

The Four Mitzvas of Purim 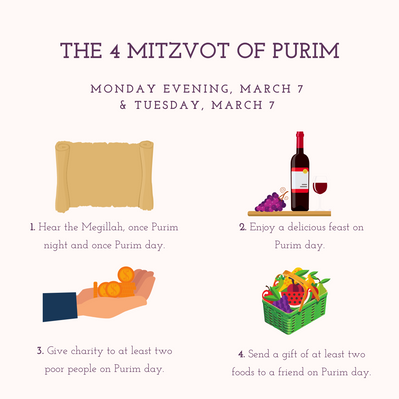 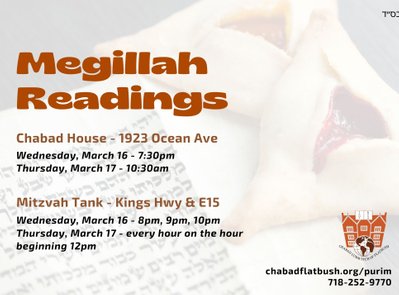 To request a Megillah reading in your home,

please use the form on the bottom of this page.

Sign up here for our family Purim feast, themed "Purim International". Featuring delicious international cuisine, a multi-media Megillah reading, a fun interactive game-show and an exciting masquerade for the children coming in costume. 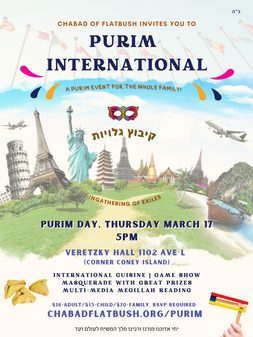 Help with the Holidays

Use this form to any ask anything related to the Holiday, how-to questions, requests, assistance etc. We will get back to use as soon as possible.