Chanukah with Chabad of Flatbush 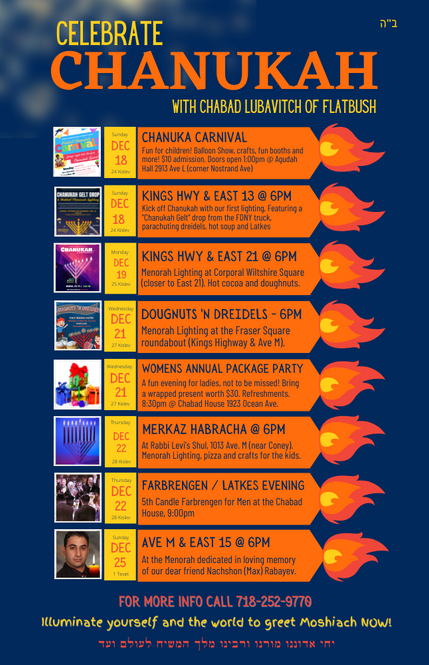 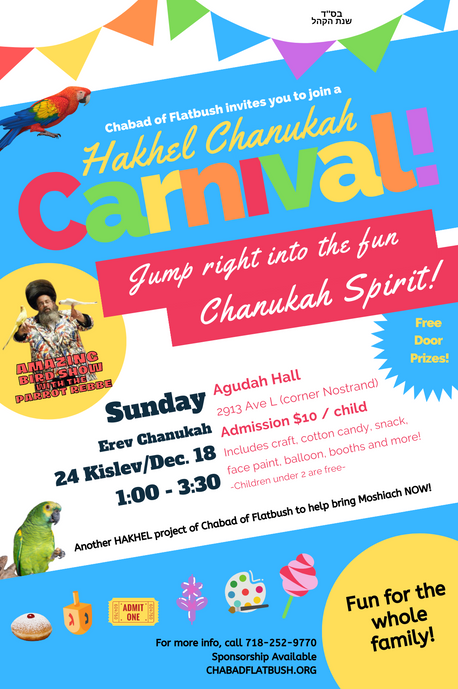 Mitzvas and Customs of Chanukah

At the heart of the festival is the nightly menorah lighting. The menorah holds nine flames, one of which is the shamash (“attendant”), which is used to kindle the other eight lights. On the first night, we light just one flame. On the second night, an additional flame is lit. By the eighth night of Chanukah, all eight lights are kindled.

On Friday afternoon, care must be taken to light the menorah before Shabbat candles are lit, and the following evening they are to be kindled only after Shabbat has ended.

Special blessings are recited, often to a traditional melody, before the menorah is lit, and traditional songs are sung afterward.

A menorah is lit in every household (or even by each individual within the household) and placed in a doorway or window. The menorah is also lit in synagogues and other public places.

In recent years, thousands of jumbo menorahs have cropped up in front of city halls and legislative buildings, and in malls and parks all over the world.

On Chanukah, it is customary to play with a “dreidel” (a four-sided spinning top bearing the Hebrew letters,nun,gimmel,heiandshin, an acronym fornes gadol hayah sham, “a great miracle happened there”). The game is usually played for a pot of coins, nuts, or other stuff, which is won or lost based on which letter the dreidel lands when it is spun.

Learn how to play dreidel.

In today’s consumer-driven society, people tend to place great importance on giving Chanukah gifts. However, the tradition is actually to give Chanukah gelt, gifts of money, to children. In addition to rewarding positive behavior and devotion toTorahstudy, the cash gifts give the children the opportunity to give tzedakah (charity). This has also spawned the phenomenon of foil-covered “chocolate gelt.”

The abridged story of Chanukah

REMEMBERING LIGHT
During the time of the 2nd Temple, the Holy Land was ruled by cruel Greeks. They robbed the Jews of their property, and set up idols in the Beit HaMikdash. No one could stand up against them, till Mattityahu and his sons rose up and drove them from the land. The Chanukah lights remind us of the great miracle that a small band of Jews defeated the mighty Greek armies.

FIGHTING FOR LIGHT
The Greeks were philosophers. They accepted the Torah as a book of wisdom, but not as something holy that connects us to Hashem. In the end, they made Torah learning illegal, and outlawed Mitzvot like Shabbat, Rosh Chodesh, Brit Milah, and the holiness of Jewish marriage. The Maccabees risked their lives to keep Torah alive! That’s why they won!

THE MIRACLE OF LIGHT
An even greater miracle than defeating the Greek armies was the miracle of the oil. The Greeks had made all the oil in the Beit HaMikdash impure. Miraculously, the Maccabees found one jar that had been overlooked. But it only had enough oil for one day. So great was their love of G‑d, that they lit it anyway! Hashem made another miracle, and the oil burned for eight days! Everyone could see that the Shechinah dwelt with the Jews.

JOYOUS LIGHT!
With tremendous joy, the Jews cleansed the Beit HaMikdash and began to serve Hashem once again! Nowadays, we have to draw on that joy, because the darkness has grown very great! That's why we make Chanukah parties, with dreidels, latkes, and Chanukah gelt. Joy has the power to overcome any negative thing, and break any evil decree!

ADDING LIGHT!
Every day of Chanukah we add another candle till all eight candles of the Menorah are ablaze. By adding a candle every night for 8 days, we charge ourselves up with light, so that we will constantly be adding in Torah and Mitzvot (which are compared to light), throughout all the days of the year to come.

HOLY LIGHT!
The light of the Chanukah candles is holy, like the light of the Menorah in the Beit HaMikdash. We are careful not to use it for any purpose — our Mitzvah is just to look at the candles and listen to the story that they tell.

FILLING THE WORLD WITH LIGHT!
The miracle of Chanukah occurred in a dark time when there were wicked decrees against the Jews. But the Maccabees had courage and never lost hope. Their mesirut nefesh (self sacrifice) turned the darkness into light! Today too, our mesirut nefesh for Torah and Mitzvot will light up the world and bring Moshiach Now!